When we began to work on this month’s challenge to create a ‘family tree’ showing the literary ancestral lines that we’ve traced on the site, we soon realised that we couldn’t possibly accommodate all the intertwined connections between the forty-five authors we’ve profiled so far.

Instead, we decided to focus on the literary forebears and successors of just four of our favourite novelists: Jane Austen, Charlotte Brontë, George Eliot and Virginia Woolf. You’ll need to click on the image and zoom in to read it. 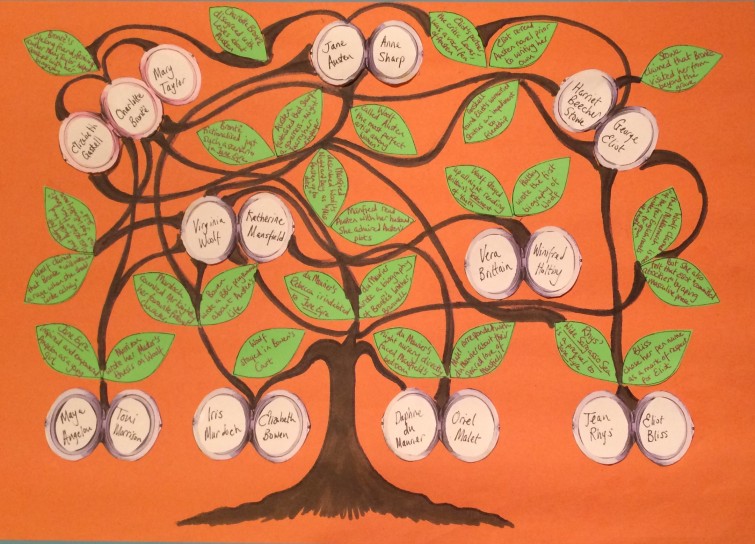 One of our readers, Sarah Emsley, offered us the perfect excuse to re-read Jane Austen’s Emma as she is hosting Emma in the Snow – an online celebration of the bi-centenary of its publication. Our piece will go live on her site on January 1st, and we’ll also post a conversation between the two of us about the novel here on Something Rhymed. We’ve had such fun reacquainting ourselves with this novel – an old favourite.

If you are looking for a holiday read, we’d love you to choose Emma so that you can share your thoughts with us in the new year.

In the meantime, we both hope that you have a peaceful holiday and that 2016 is full of creativity and friendship.

Last week, Emily posted a video in which she spoke about the role of consolation (and neglect) in the friendship of George Eliot and Harriet Beecher Stowe.

In my video, I’ve chosen to reflect on the dynamic between kindness and cruelty in the relationship between Katherine Mansfield and Virginia Woolf.

These are topics we’ll be returning to in greater detail during our lunchtime lecture on December 3rd at New York University – London. We’ll provide more details nearer the time but we do hope that some of you can make it.