Longstanding readers of Something Rhymed know that Emily and I have been reading or re-reading the works of Jane Austen, Charlotte Brontë, Mary Taylor, George Eliot, Harriet Beecher Stowe, Virginia Woolf and Katherine Mansfield. We embarked on this literary marathon as part of the research for our forthcoming book, A Secret Sisterhood, and we have been sharing our conversations with you.

This month I re-read a novel that has perhaps influenced me more profoundly than any other. Below is the letter I sent to Emily, in which I explained the root of my fascination. 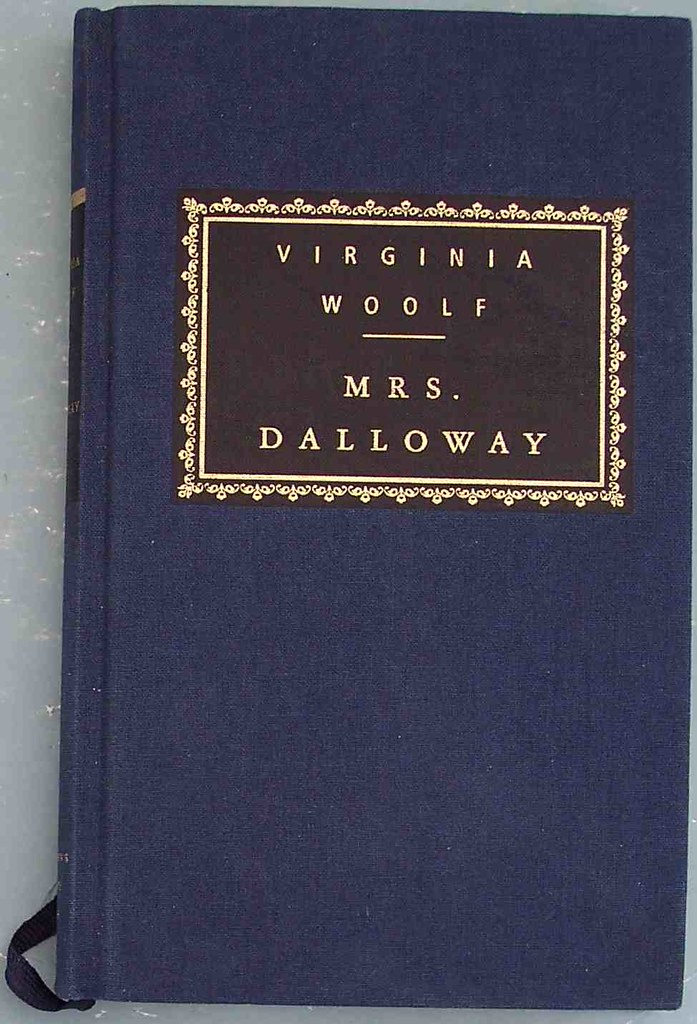 I’m sending you my copy of Mrs Dalloway, its margins filled with notes in different coloured inks. My fascination with Virginia Woolf predates our friendship by half a decade – the enclosed novel already dog-eared from several readings by the time you and I first met. It seems strange that I’ve never shown you this book, since my interest in Woolf is something I now share with you: the hours we’ve pored over her handwriting; our annual trips to her sister’s farmhouse; that time we forced our way through the crowds to reach her iconic image at the National Portrait Gallery. This well-thumbed novel is my way of introducing you to the Emma who, in 1996, propped herself up with pillows in her childhood bedroom in Birkenhead, breaking the spine of her brand new book.

In the rare quiet of the early morning – last night’s Mersey Beat still ringing in my ears, my hair heavy with nicotine – I struggle over Mrs Dalloway’s opening pages. Self-doubt bloats in the pit of my stomach. In just a week’s time, I will travel south from Liverpool Lime Street to an educational centre that promotes fair access to Oxbridge, and the tutors there will expect me to speak intelligently about this unfathomable book. It crosses my mind that the centre’s admissions team might have been right when they rejected my initial application. Perhaps I shouldn’t have convinced the Head of Sixth Form to write that second reference. As my hands leaf through the pages, my thoughts turn to the other successful applicants. Will they have understood with ease this book that’s defeating me?

Back then, I burned with such a ferocious sense of competition that I’m glad I didn’t meet you until half a decade later. I would learn so much about sisterhood during those intervening years.

Watch me focus once more on my new book, searching for stability amongst its shifting sands. See my concentration lapse as the rest of the house begins to wake. Hear the sounds from upstairs of my fourteen-year-old sister, exuberantly embracing the day: ‘What noise does an owl make? Twit-twoo, I love you true. Who do you love the best, pork pie or custard?’ Like most nights, she has crept into my parents’ bed during the early hours of the morning, lying diagonally across their mattress, forcing them to opposite sides. And, like most mornings, they sing her favourite nursery rhymes until they can no longer fight their fatigue. Listen out then for my dad’s stage whisper: ‘I’m sure Emma would love to play. Why don’t you go and wake her?’

Lou enters my room, cradling one of her noisy toys. After a minute or so of feigning sleep, I admit defeat by lifting my duvet and inviting her in. Partly to distract her from her talking teddy bear, I read to her from my difficult book. Lou clasps my chin and listens intently. I would love to know whether she shares my feeling that this novel marks a departure from those we’ve enjoyed together during the past few years: novels by Jane Austen, the Brontës and George Eliot.  But it’s impossible to tell whether she appreciates simply the tones and tremors or whether she also picks up on some of its sense.

What were you and your sister reading, I wonder, back when I was reciting Mrs Dalloway to Lou? I would love to get a glimpse of you both in your teens, sitting in your home on the outskirts of York, worlds unfurling from the pages of your books. Lou and I were separated from you and Erica by the Pennine hills’ great spine, neither pair of us aware of each other’s existence. But perhaps you sat up in bed with The Collected Stories of Katherine Mansfield while I opened my copy of Mrs Dalloway. I know that you came to the New Zealand author’s work far earlier than I did, but you’ve never told me about your discovery. Did your imagination take flight from your small Yorkshire village, landing in the author’s childhood of wooden verandas, fresh oysters, and aloe trees that flower once in every hundred years? Was it you or Erica who first came across these stories; did you argue over which one you each preferred?

Just a week after I fell in love with this compassionate novel about a shell-shocked soldier returned from the front, I discovered something that filled me with the same kind of fury that Katherine had once felt. Imagine me if you can, Emily, nineteen years ago, sitting in a darkened seminar room in that educational centre in Oxfordshire, flush with hatred for Virginia Woolf. My new classmates and I are watching a film about Modernist literature, and Virginia’s diary entry for January 9th, 1915 has just appeared on the screen:

On the towpath we met & had to pass a long line of imbeciles. The first was a very tall young man, just queer enough to look twice at, but no more; the second shuffled and looked aside; & then one realised that every one in that long line was a miserable ineffective shuffling idiotic creature, with no forehead or no chin; or an imbecile grin, or a wild suspicious stare. It was perfectly horrible. They should certainly be killed.

I now know that Virginia was on the verge of a shattering breakdown when she made this note in her diary, and that ‘imbecile’ was the official terminology of the time. But pause for a while with the sixteen-year-old me, wounded by Virginia’s vehemence. Would this author have described my sister with such vitriol: Lou, who had climbed into my bed, our bodies still warm with sleep, whose palm had felt the vibrations of Mrs Dalloway, whose ears had delighted in its music – would Virginia have condemned her to death?

Together, Lou and I had come under Mrs Dalloway’s incantatory spell: ‘Like a nun withdrawing, or a child exploring a tower, she went upstairs, paused at the window, came to the bathroom. There was the green linoleum and a tap dripping. There was an emptiness about the heart of life; an attic room.’ I’m still at a loss to explain the magic of these lines, but they have continued to enchant me, even during the moments when I’ve doubted the sisterliness of their author.

Search with me, Emily, the faces of my fellow students, studying them for signs of solidarity. Share in my confusion at the endurance of my love for Mrs Dalloway and, by extension, its creator – a complicated love affair with a complex book, which I now want to share with you.

With love and friendship,

Next month Emily and I will be talking about ‘Prelude’ – a long short story by Katherine Mansfield, which Virginia Woolf commissioned for her newly-formed Hogarth Press.

Right now, we are looking forward to reading Everyone is Watching, the debut novel by Something Rhymed guest blogger, Megan Bradbury, which is out on 16 June.

14 thoughts on “Mrs Dalloway and Me: A Complicated Love Affair”

This site uses Akismet to reduce spam. Learn how your comment data is processed.