My research into Margaret Oliphant revealed that she grew up in my home region of Merseyside. History has neglected so very many aspects of Oliphant’s extraordinary life but her northern upbringing has remained especially shrouded in mystery.

She is more often associated with London or Scotland, but, with some digging, I discovered that Oliphant spent the early years of her literary career living just a few minutes’ walk away from my family home. She moved to 24 Kenyon Terrace in 1850, the year after she published her first novel. 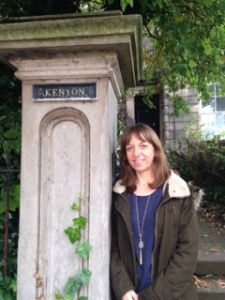 I’ve learnt so many things while investigating forgotten female friendships, but Oliphant’s residence in my hometown has perhaps moved me most profoundly. At first, I felt rather puzzled by the intensity of my reaction. But then it struck me that I had never before heard of any novelist hailing from Birkenhead.

Despite forever having my head buried in a novel or notebook, the dream of authorship never entered my mind during childhood or adolescence. It’s not that I lacked ambition. When I was a teenager, I aspired to write the blurbs on book jackets. It simply didn’t occur to me that I could become (or even dream of becoming) the woman who actually wrote the books.

And why would it have done? The authors whose novels I devoured did not much resemble me: Jane Austen lived in genteel poverty and was not expected to work outside the home; Virginia Woolf’s annual allowance funded her room of one’s own. Where was the maternal literary line through which I could trace examples of female authors based in industrial northern towns, women who found a way to earn their living by the pen?

These women did exist, I realise now. We’ve profiled some of them on this site: Elizabeth Gaskell and Winifred Holtby spring to mind. I can’t help but wish that I’d known about this tradition, back when I was growing up in Birkenhead. How inspiring it would have been to learn that in 1850 a twenty-two-year-old woman wrote a novel at a dining table less than a mile from the room in which I made my own first tentative attempts to write.

This weekend just gone, I peered through the bay window into this very dining room. My mother at my side, I imagined the young Oliphant entranced by the world she was creating on the page while her own mother sat beside her, absorbed in her cross-stitching. Oliphant’s former home is now divided into bedsits, several wheelie bins crowding around the front steps. On one side, the adjoining house stands derelict, its windows boarded up. But the house on the other side offered more of a glimpse into the middle-class comforts that these buildings would have afforded in Oliphant’s day. Here the residents sat in armchairs, a chandelier illuminating them as they drank their coffees and read their papers. 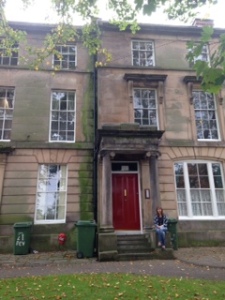 All of life stands cheek by jowl here, and yet the autumnal streets through which I walked with my mother and sister are radically under-represented in British fiction. It took us some time to find Oliphant’s former home because the street numbers have changed since her day, and there’s no plaque to mark the fact that a great Victorian writer began her literary adventure here: an unsurprising yet poignant ending to a pilgrimage through a forgotten town in search of a forgotten female forebear.