Cassandra Austen took the time, just four days after her sister’s funeral, to pen a letter and send some treasured mementoes to Jane’s friend, the governess and amateur playwright Anne Sharp. It was the second letter she is known to have written after Jane’s death. The first was to Fanny Knight: the niece whom Anne once taught.

When I first learnt that Anne was the only person outside of the Austen family and household to receive such poignant trinkets, I assumed that the note accompanying Jane’s lock of hair, pair of belt clasps and silver needle would have been infused with a sense of shared love and grief for Jane.

But, when I tracked down Cassandra’s letter, I detected instead a barbed quality that hints at a deep conflict between Jane’s sister by birth and the sister-friend she singled out. 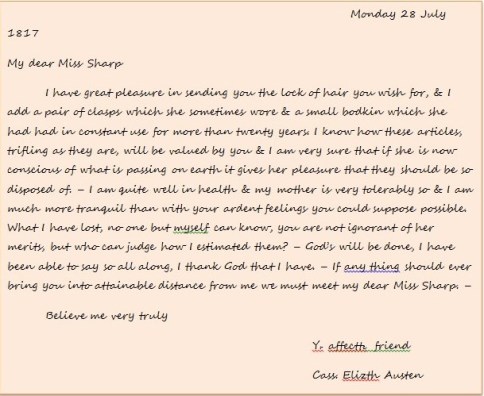 I long to read the letter Anne sent to Cassandra, to measure for myself the friend’s ‘ardent feelings’ against the sister’s stoicism. But Anne’s voice has been largely silenced – like that of so many working women of the past.

In her dotage, Cassandra re-read all of Jane’s correspondence one last time. Secretly, she then removed from her cache all those letters she felt might compromise the mythology her family had constructed of Jane as a meek, conservative maiden aunt, who dabbled with storytelling in between chores. And finally Cassandra built up a fire and, one by one, fed her sister’s most personal words to the flames.

But surviving letters, like the one above, and several volumes of unpublished diaries have allowed us to reconstruct something of Jane’s incendiary relationship with a woman of lower social standing – a sister-friend who shared her fieriness, whose ‘ardent feelings’ provided a welcome contrast to her sister’s ‘tranquil’ restraint.

Cassandra’s envy of Anne’s intimacy with Jane emerges in her insistence that ‘What I have lost, no one but myself can know, you are not ignorant of her merits, but who can judge how I estimated them?’ Cassandra could have become close to Anne through their shared bereavement. After all, Jane had drawn both intelligent spinsters into her inner circle. But the sister found the sister-friend’s spirited personality a source of pain during this desolate time.

The letter is freighted with Cassandra’s conflicting emotions: her desire to honour her sister’s highly-valued relationship competing against the dual demands of snobbery and envy. She feels compelled to offer the hand of friendship to the woman her sister so loved: ‘If any thing should ever bring you into attainable distance from me we must meet my dear Miss Sharp’. But she will not go out of her way to visit the woman her sister called ‘my dearest Anne’, nor will she offer any specific hospitality.

So, imagine my surprise when I discovered that Anne stayed in Chawton Cottage with Cassandra for several weeks in 1820 – three years after Jane’s death. We know then that the fraught relationship between sister and sister-friend endured against the odds. But from this answer more questions arise: How did the pair move from competition to compassion? What took them from half-hearted invitations to residing under the same roof? How did their relationship develop and change during this time?

These questions send me back to the diaries, back to the letters that survived the flames, back into the realms of my own imagination where Anne sits beside Cassandra, reminiscing about their beloved Jane, a fire roaring in the grate.