Emily and I have sometimes envied Vera Brittain and Winifred Holtby their shared university years. If we could defy time and pal up with just one of the pairs of writers that we’ve profiled on this site, I’m pretty sure that we’d both pick these friends: two women who ‘didn’t exactly grow up together’ but ‘grew mature together’ and considered that ‘the next best thing’.

Unlike them, we met after separate and rather different undergraduate experiences: Emily partying hard in London while I pored over books in Cambridge. 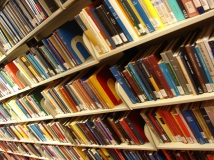 In the best possible way, co-running Something Rhymed feels akin to studying together. We now spend hours on end searching the stacks at Senate House Library, and we regularly exchange bulging folders of notes. We’ve created for ourselves a second stab at studenthood – this time together and with a curriculum of our own.

This month I’ve relished the chance to re-read the poetry of Marianne Moore, which I’d first come across as an undergrad. We toyed at first with profiling Moore’s friendship with fellow modernist Hilda ‘H.D.’ Doolittle, who she met in 1905 when they were both studying at Bryn Mawr College, Pennsylvania. But we ended up becoming even more fascinated by a bond that began in 1934 when the middle-aged Moore took final-year undergraduate, Elizabeth Bishop, under her wing.

Both Emily and I have benefited from the wisdom of women writers older and more experienced than us and, as with Moore and Bishop, these mentorships have sometimes blossomed into friendships. Now that we teach ourselves, we’ve had the chance in our own small way to continue this intergenerational sisterhood.

Without ever really discussing it, we must have both come to the conclusion that – in the widest sense – the best students are also teachers; the best teachers, forever students. We each tend to enrol in one writing course per year – sometimes together, sometimes separately – to remind ourselves what it feels like to sit at the other side of the desk. And yet we were surprised (and heartened) to learn that a poet of Moore’s stature had taken this same approach.

Inspired by Moore, this month I’ve been attending Berko Writers’ screenwriting course, taught by Abigail Webber, formerly a commissioning editor and now a script consultant. I have written poetry, fiction and non-fiction over the years, taking my first steps into all of these forms as if entering familiar rooms. But screenwriting has always felt like a closed door – and one on which I felt nervous even to knock. My heart pounded so loudly during the first session at Berko Writers that I promised myself never to underestimate the courage it might take for one of my own students to step into my class.

The course has opened up that locked door, and screenplays no longer feel to me like a forbidden wing in literature’s house. Emily’s acting background and her storyteller’s skill lead me to suspect that she might one day turn her hand to scripts and that I might get to share with her the tips that I’ve recently gleaned.

Emily’s storytelling skill and lyricism were recognised last night at the awards ceremony for the prestigious Lucy Cavendish Fiction Prize 2015. Emily’s shortlisting opened up for her – and for me as her guest – the usually closed doors of the dining hall at this Cambridge College. Here we had the chance to chat over dinner with its president, Professor Janet Todd – a feminist heroine of ours. In the hall at Lucy Cavendish, among its students and fellows, I enjoyed the great privilege of cheering on my friend as she was announced the winner. As I sat there, watching her receive her prize, it dawned on me that this shared moment of celebration more than made up for our separate university years. Growing mature together is, in fact, the very best thing.

13 thoughts on “Growing Mature Together”

This site uses Akismet to reduce spam. Learn how your comment data is processed.