As fans of  The Mutual Admiration Society: How Dorothy L. Sayers and her Oxford Circle Remade the World for Women, we were delighted when its author Mo Moulton agreed to write a post for this blog. Long-time readers of Something Rhymed might recall us profiling Sayers’s literary bond with fellow crime author Agatha Christie back in 2015. Mo, though, focuses on the several-decades-long friendship between Sayers and Muriel St. Clare Byrne. It’s a piece that raises fascinating questions about criticism, collaboration and female friendship, and one that we’re sure our readers will enjoy.

That’s the question I always get when I speak about the Mutual Admiration Society, a writing group founded in 1912 at Somerville College, the University of Oxford, by a group of young women who remained friends and collaborators for life. The answer is yes, of course – if anyone has discovered the secret of decades-long, conflict-free intimacy, it wasn’t them, and it isn’t me. Even the name is a joke rather than a description: future detective novelist Dorothy L. Sayers, a founding member, said they should call themselves a mutual admiration society, before others did. 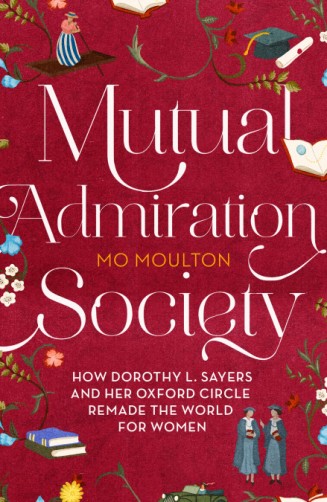 In fact, the MAS was free with sharp criticism. Sayers’s closest friend in the group was Muriel St. Clare Byrne, who would go on to be a playwright and a historian of Tudor England. Before that, she was editor of the student literary magazine, The Fritillary. Assessing Sayers’s entry to a poetry competition run by the magazine, Byrne wrote that it ‘has some very good lines in it, but has also too many serious lapses to justify the award of a prize’.

After university, Sayers and Byrne were in less frequent contact, as each struggled to find her own way as an independent woman in postwar London. By the late 1920s, however, they had become firm friends again, and Byrne and her partner Marjorie Barber won a cameo appearance as Harriet Vane’s best friends, Sylvia and Eiluned, in the 1929 Lord Peter Wimsey crime novel Strong Poison. (Eiluned, we learn, ‘scorns everything in trousers’, a classic euphemism if ever there was one.)

Strong Poison is based on one of Sayers’s own unhappy love affairs, and it introduces a romantic interest to the Wimsey novels in the person of Harriet Vane. Having created Vane, Sayers seemed unsure what to do with her, writing several more Wimsey novels that fail to advance the romantic plot. Her writerly impasse echoed her real-life dilemmas, which she and Byrne discussed in depth.

In 1933, they took a road trip together. Sayers introduced Byrne to her son, who had been born out of wedlock a decade earlier and was raised in some secrecy by her cousin in Oxford. They drove on through Somerset, and I imagine them in the car, rattling rapidly between high hedges, talking about whether Sayers should divorce her husband, and, probably, what Byrne should do about her own desire to incorporate another partner into her relationship with Barber.

A year, and no doubt many conversations later, Byrne proposed: why not write a play together, set during the honeymoon of Lord Peter Wimsey and Harriet Vane? The result was Busman’s Honeymoon, a comic detective play that nonetheless takes on serious questions about how to reinvent marriage to be egalitarian, honest, and liberating rather than constraining and degrading. Drafts of the play reveal the working process to have been frank and equal, too: Byrne and Sayers debate everything from individual word choices to the big questions of motive and emotional integrity.

Having committed to an on-stage honeymoon, Sayers needed to get her characters engaged to be married, which she did in the novel Gaudy Night. Written after Busman’s Honeymoon was completed, but before it was performed, Gaudy Night is probably Sayers’s most beloved novel, an homage to Somerville College as well as a love story. But Byrne was unconvinced by the version she read in draft, finding it slow-moving and unlikely to appeal to readers.

Is this, finally, the fight that folks want, the dramatic falling-out after collaboration? It is not. Sayers rebutted the criticism but took it in stride. In fact, she looked forward to seeing Byrne again soon so they could have ‘a good argufying evening’.

In the questions about fights, I hear an echo of the stereotypes about women and friendships: that women are competitive, they are jealous and catty, they don’t have real friendships. But, as Sayers and Byrne would go on to argue in a pair of linked essays, women are, after all, just human beings, who loved and fought like any other human beings.

Sayers dedicated the 1937 novel version of Busman’s Honeymoon to Byrne, Barber, and their mutual friend Helen Simpson. In her dedication, she dismisses the stereotypes and celebrates, instead, that ‘friendship of which the female sex is said to be incapable; let the lie stick i’ the wall!’

Sayers and Byrne debated and argued and disagreed, but that was a part of their friendship, which ultimately became a collaboration that transformed them both as writers and thinkers.

Mo Moulton is a historian and writer, and the author of The Mutual Admiration Society: How Dorothy L. Sayers and her Oxford Circle Remade the World for Women. You can find out more at momoulton.com. They are also on Twitter @hammock_tussock. (Photo credit: Holly Revell)

Despite some parallels in their childhoods, and their shared status as ‘Golden Age’ queens of crime, the differences between Agatha Christie and Dorothy L. Sayers were far more profound.

Agatha Mary Clarissa Miller was schooled largely at home. Her mother had wanted to hold her back from reading until she was eight, but by the age of five the impatient girl managed to teach herself.

While Christie’s learning was relatively ad hoc, and focused ultimately on helping her to find a good husband, the parents of Dorothy Leigh Sayers (who also educated her at home) kept her to a rigorous schedule.

Sayers eventually won a scholarship to Somerville College at the University of Oxford (also the alma mater of writer friends Vera Brittain and Winifred Holtby) and went on to a series of jobs, most successfully in the advertising industry.

Later in life she would return to academia, her translation of Dante’s Divine Comedy becoming the work of which she felt most proud. But most remember her as the author of the Lord Peter Wimsey novels, and it was this position as a writer of detective fiction that led her into a friendship with Christie.

Both were members of the Detection Club. This group of leading crime writers, who met regularly to socialise and talk shop, had to abide by a strict set of literary rules designed to give the reader a fair chance of guessing the guilty party in their books. They also jointly-penned several mysteries, three of which – the novel The Floating Admiral and two radio serials – included both Christie and Sayers as contributors.

Each woman’s attitudes to these activities illustrate the contrast in their personalities. Sayers devised the club’s elaborate initiation rituals, threw herself into ceremonies with gusto, and took on the formidable task of organising her fellow writers for their collaborations.

The reserved Christie, on the other hand, merely submitted to her initiation. When she accepted the role of president (succeeding Sayers) it was on the condition that someone else be appointed to make speeches and chair events.

When working on the radio serials, she often proved elusive, leading to frantic phone calls and letters between her and Sayers when at last she’d been tracked down. But Sayers also sent notes praising Christie’s recent fiction and divulged her exasperation at what they both saw as unnecessary interference by J.R. Ackerley, their BBC producer.

The feeling, incidentally, appears to have been mutual. Ackerley later recalled that, though Christie was one of his favourite detective fictionists, he believed she was a ‘little on the feeble side’ as a broadcaster – adding that ‘anyone in that series would have seemed feeble against the terrific vitality, bullying and bounce of that dreadful woman Dorothy L. Sayers’.

Able to earn far more from other writing endeavours, Christie’s sense of loyalty to Sayers was probably a major reason why she agreed to take part in even as many of these joint ventures as she did. But Sayers also came to her friend’s aid on several occasions, including joining in with the search for the author during her famous 1926 ‘disappearance’. She also provided a vital supporting vote when disgruntled members of the Detection Club, unhappy with the ‘unfair’ plot of her Poirot mystery The Murder of Roger Ackroyd, called for Christie to be expelled.

It has been said that, partially due to her shyness, Christie had few intimate female friends. But with Sayers she established an important working friendship, and one on which each woman was able to draw for support through the glory years of their success.

The Detection Club often held their official dinners at London’s Café Royal. This month, we will visit this historic venue for a cocktail or two. Since the Detection Club sometimes wrote collaboratively and also came up with a series of rules to abide by, we will come up with a list of ‘rules’ for the writing we do together.